In the early 1970’s Mark Farner and the band “Grand Funk” helped put my home town on the map through their extraordinary musical success. Mark, like myself, is from Flint, Michigan. Like myself, his family ended up in Flint because of the great jobs available – way back when (not anymore) – in the auto industry. Mark was the real talent, in my opinion,
in Grand Funk; he wrote, and, sang, almost everything they recorded. He’s also a devout Christian who has recorded multiple contemporary Christian albums. In 2005 he appeared on the “Coast to Coast” radio program, with Art Bell, and discussed both his musical career and an incredible UFO siting experienced by himself and family members. As someone who’s seen a UFO, close up, I really enjoyed this interview. He’s from my home town, I was a fairly successful musician most of my life, and he just reminds me of a lot of “Flintstones” I know – and myself. He’s a regular guy (apart from his enormous success as a musician) who had a very “irregular” experience. And he’s honest about it. Here’s the second hour of the interview, in which he discusses the UFO siting: 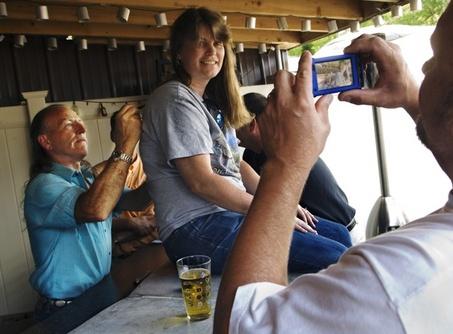 Ryan Garza | The Flint Journal | August, 2009
Dawn Gray, 39, of Swartz Creek, rests on the bar as her husband Dell takes a picture while musician Mark Farner signs her shirt on Thursday at PD’s Pub in Flint during a meet and greet to promote his concert this Saturday at Atwood Stadium in Flint. ‘It was awesome. I can’t believe he signed my shirt,’ said Gray. ‘I’m going to get home, take it off and probably frame it.