The Bob Lazar conundrum: is there any truth to Lazar’s claims?

defintion conundrum: “A complex or perplexing problem that generally has no clear solution.”

As UFO stories go, perhaps none have generated more interest and more controversy than the tale told by Bob Lazar. While the investigation of UFOs is a field of study where the weirdness often seems to know no bounds, Lazar’s story remains one of the benchmarks for both high strangeness and controversy.  At first glance, Lazar’s claim – that he was hired by the U.S. government to reverse engineer the propulsion system of an alien spacecraft – is a story which never fails to send the imaginations of ufologists reeling.    A highly unscientific inventory of internet forums and other web sites would suggest that a significant number of people who follow the subject of UFOs take Lazar seriously and believe that, to some extent, his story reflects an actual experience. However, the vast majority of eminently respected UFO researchers who have scrutinized Lazar’s story view it largely (or completely) as a fabrication. They note that Lazar’s accounts of both his UFO experience (supposedly reverse engineering an alien craft at Area 51) and his life (his education, career, etc.) contain few verifiable facts and, in fact, many of Lazar’s claims contain demonstrably false and misleading information.

Stanton Friedman, often called the “grandfather of ufology” has been particularly vocal in characterizing Bob Lazar as a liar and a fraud.  Renowned as one of ufology’s smartest and most thorough researchers Friedman visited numerous archives in an effort to verify Lazar’s claims about his education, and, employment (and about his life, generally).   Friedman discovered, among other things,  that there were no records of Bob Lazar attending any of the colleges from which he claimed to have earned advanced degrees.   Further, he interviewed faculty members  and found that not one person recalled Bob Lazar.  Another individual who came to the conclusion that Lazar was could not be believed was Tom Mahood.  Mahood’s name is not well known in ufology and, in fact, prior to hearing Lazar’s story Mahood was not involved in research on the subject of UFOs.   While there’s not a lot of information available on Tom Mahood  he’s  apparently a bright guy who just loves  a good mystery.   Much like a gentleman named Jim Campbell, Mahood had done a  considerable amount of amateur sleuthing on the topic of  The Nellis Range – known, more popularly,  as Area 51.   When he ran into Lazar’s story he was, of course, fascinated.   At some point he began doing independent research on the matter and regularly published his findings on his own web site (now defunct).   While Mahood’s  site contained information on Area 51,  as well,  it was largely devoted to analyzing the claims of Bob Lazar.   Mahood’s research on Lazar seemed reasonably objective and was certainly thorough.  On numerous occasions  he corresponded with both Bob Lazar and his friend, Gene Huff (who had supposedly ridden to the desert with Lazar to witness, and, videotape secret test flights of a captured alien spacecraft).  Mahood also spoke with people who had worked with Bob Lazar, or, who had known him otherwise.   Finally, Mahood actually went back to college and studied physics in an effort to determine whether or not Lazar’s science made any sense.   Once captivated by Lazar’s tale, Mahood eventually leveled scathing criticism at Lazar.   Through his research Mahood ultimately concluded that Lazar was an inveterate  “bullshitter”, and, someone who was “lying through his teeth”.

As noted above, Tom Mahood only became interested in the Lazar story as a consequence of his interest in Area 51. Having satisfied himself about Area 51 – and Bob Lazar – he eventually took down his web site and has virtually no association with UFO groups. While his inquiry into Lazar’s claims constitute one of the most respected efforts to look at the matter thoroughly, Mahood lives a quiet life in Southern, California and virtually never comments on Lazar nor the topic of UFOs. For Mahood, and Stanton Friedman, and many other top UFO researchers the case of Bob Lazar is a case closed – and Bob Lazar is a con man and a liar. 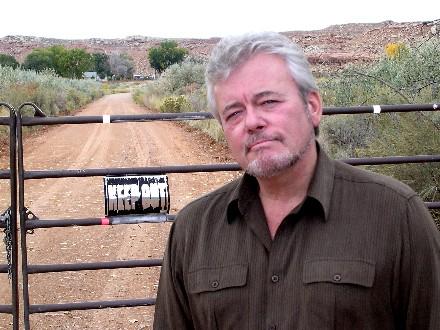 It’s worthy of note that Lazar’s story became big news after Las Vegas television news anchor George Knapp (KLAS) did a series of investigative reports which featured Lazar, in the late 1980’s. The fact that Knapp was a traditional journalist and not associated with the topic of UFOs helped propel the story to the national spotlight. While Knapp says he’s discovered evidence which corroborates Lazar’s claims of working at Area 51 – and still maintains that the other  important parts of Lazar’s story are likely true – even Knapp has tacitly admitted that Lazar appears to have fictionalized a few things along the way.  In a television interview Knapp seems to acknowledge that some of Lazar’s claims are certainly false by saying that, “Bob Lazar wouldn’t the first person in history to lie on a resume.” Regardless of the veracity of Lazar’s testimony the series he’d done with Lazar proved to be a career changer, for Knapp, who left traditional news reporting to focus on a variety of paranormal subjects. He’s been the host of numerous UFO, television documentaries and currently rotates as a host for the popular Coast to Coast AM radio show.   Such was the power of Lazar’s story, regardless of whether or not it was true at all.

There are, indeed, various problems with Bob Lazar’s story. Depending upon who you ask, of course, the seriousness and meaning of the holes in his story can be interpreted differently. But on one thing, almost everyone agrees: Lazar’s testimony concerning his academic background appears to be a work of fiction and unquestionably constitutes a series of lies.   Further, the portion of his academic background which can be verified doesn’t seem to suggest anyone with a gift of genius.   Specifically:

While Lazar’s accounting of his academic career seems, unquestionably, to be a work of fiction it’s not the only thing which makes researchers wary of Lazar and his tale. On a more subjective level, there are things about Lazar’s personal life that work – in the minds of many – to paint Bob Lazar as someone of questionable character.

Most notably, Lazar pled guilty to a charge of pandering in Las Vegas in the early 1990’s.   According to Lazar, however, the judge actually presented him with a list from which Lazar was told he could select his own charge. For reasons only Lazar could know, he chose pandering. Lazar’s arrest and conviction grew out of the fact that an acquaintance had hired him to install a computerized, camera surveillance system in a Las Vegas brothel. Lazar said he knew the owner because he and his wife had, at one time, invested in one of the legal brothels in northern Nevada. Bob Lazar laughs about the incident, in interviews, and seems to suggest that it’s all much ado about nothing. Lazar’s explanation of the episode has never been disputed and it seems clear that he simply installed the surveillance equipment.  Nonetheless, it constitutes a criminal history and is frequently used by critics to further discredit Lazar and his Area 51 story.

Tom Mahood presented a variety of evidence on his web site which called into question both the quality of Lazar’s character, and, his knowledge of physics.   Mahood’s investigation into Lazar’s claims was, in fact, a collaborative effort to which a number of people contributed.   In an interview conducted by a gentleman named Mark Farmer – and appearing on Mahood’s site – a former co-worker and friend described Lazar as “disingenous” and stated that, while Lazar was a smart guy, he didn’t buy a word of Lazar’s Area 51 story.   Lazar’s former friend explained that after he’d sold Lazar a car he had to chase him for five years to get paid.   As the friend put it, “(Bob’s) very intelligent. He’s also very clever and kind of a little bit of a con man”.   Mahood enlisted Dr. David L. Morgan to review Bob’s explanation of the alien propulsion system and Morgan found fault after fault with Lazar’s physics, stating that much of what Lazar described violated a laundry list of scientific laws and principles. Morgan also noted that many of  Lazar’s details were vague and confusing, and, that Lazar often used the wrong scientific terminology when describing things.

In defense of Lazar

Given all the problems, why does Lazar’ story continue to generate so much interest? Beyond the fact that it’s an extraordinary and highly intriguing tale, there are things which – in the view of some – seem to suggest that Lazar just might be telling the truth. In no particular order, here are some things to consider in Lazar’s defense:

It’s difficult, for a lot of people, to know precisely what to conclude about Bob Lazar and his fantastic story. On one hand Lazar seems likable and genuine and, perhaps more importantly, he has no apparent motive to fabricate such a grandiose tale. On the other hand, it’s difficult to escape the idea that Lazar isn’t a person who periodically lies. And if you’re telling a story like Lazar’s any demonstrable lie (for example, Lazar’s account of his academic background) will see your entire report dismissed by most serious ufo researchers.

One could make a reasonable argument that Lazar is simply an imperfect witness to history – someone who’s essentially telling the truth but who is prone, at times, to exaggeration. But it’s also reasonable for ufologists, and ordinary folks, to scrutinize every detail of a person’s life when someone is claiming something so incredible. For a lot of people the flawed character of Bob Lazar leads them to the conclusion that his story is a work of fiction. Others, to use a metaphor from Stanton Friedman, hold Lazar’s claims in their “grey baskets” and are unsure of what to believe. Maybe – just maybe – time will eventually tell whether or not Lazar is telling the truth.

6 thoughts on “The Bob Lazar conundrum: is there any truth to Lazar’s claims?”